It's the end of the year, but we've been busy leading up to it. This year I participated in a little Advent challenge, not the usual Advent of Code that everyone loves so much though. No this year I did the Advent of Ure, or adventure for short with the group over at the Small and Nearly Silent esolang pubnix. The challenge was simple, but incredibly enjoyable.

For the month of December, do something each day.

Dead simple right? The point of it all is to really just enjoy yourself, do something each day to advance a goal of your choice, and keep a log of what you're doing to share with others. Being an esolang based tilde, we all sort of gravitated to little programming projects, but really anything could count here. Don't get caught up in corporate style data crunching, just learn and do! For me this little challenge manifested in the creation of a few different tools, all of which are still works in progress, but go me out of my comfort zone and were vehicles for learning.

So what did I do exactly? Quite a bit! These are in no particular order, but the full adventure log is further down if you're curious.

Phew! That sure seems like a lot in such a short period of time! Most of it is utterly incomplete, but in every case I made solid progress just bouncing between topics/ideas as the whim came upon me. I spent a massive amount of time tinkering with Nim lang, which is increasingly becoming a favorite tool of mine. But outside of that I didn't really have a theme, I let my mind wander to things that I had left stagnant or just didn't make time for, like the i3 status utilities and droid4 hardware tool. I had good enough working versions of these things in bash and python respectively, they just weren't performant. Rewriting them in Nim gave me the opportunity to improve something I use daily while learning a little more about making tight performant Nim programs.

I Think of everything I did I'm most proud of OSA, the little TUI for our adventure logs. It's super simple, and somewhat of a hacky thrown together mess of Nim, but I actually made a terminal UI that worked and doesn't look horrid.

And these droid utilities while small have a huge impact on my day to day workflow. It's so nice to have fresh tools to make my i3 setup feel cozier while additionally being more functional. It's easy to miss in the screenshot below, but that tiny blue music indicator is amazing since I have a mocp mode in my i3 config to handle playback and song changes. Now I don't need to load mocp to do anything more than change albums/playlists! 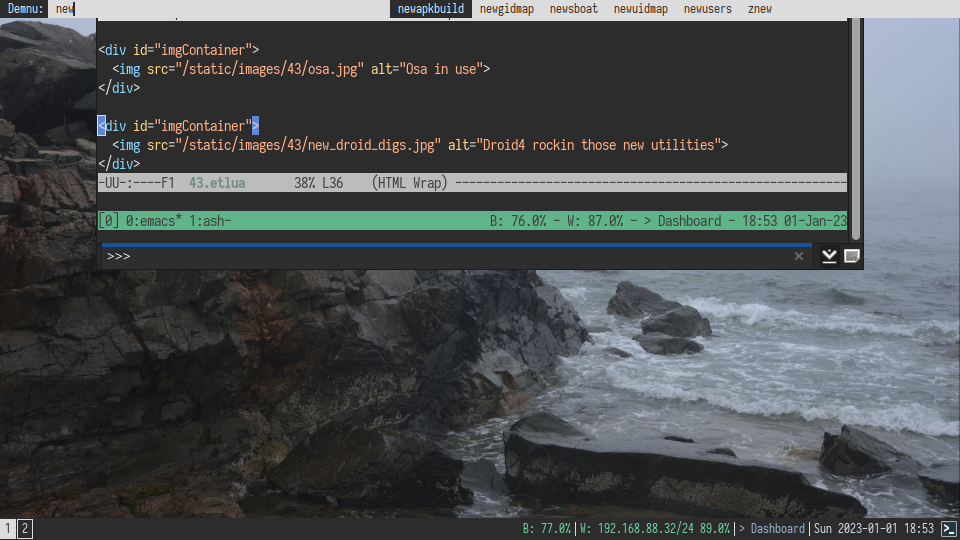 The point that's worth driving home here though is that consistency begets results. I did something each day, no matter how small it was, even when I didn't feel like doing it. And I really like the results! When I needed a break, I took it, and the gaps in my log attest to it. Life always comes first, but it's really important to make time to do something to move forward and reach your goals. I'm going to try and keep that mentality going into 2023.

Here's the adventure log I maintained during the challenge, you don't really have to read it, I've just included it here at the end if you happened to be curious what it looked like.